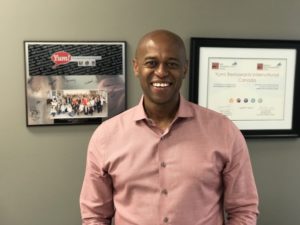 A few months ago, we had the pleasure of sitting down with Brian Henry, the Chief People Officer at Yum! Brands. You might recognize some of these favourites: KFC, Pizza Hut, and Taco Bell. Brian is a personable and enthusiastic leader. He is a big believer is soft skills training and not only have skills like communication, compassion, and collaboration helped him find success, he makes them a priority for his team to build as well. The following is our abridged conversation with this very interesting executive! 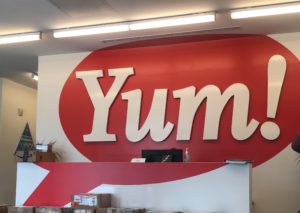 SkillsCamp: Okay, Brian, question number one. In your own words, how do you define soft skills?

At the end of the day, I think the idea of soft skills is all about personal attributes. It’s about how you interact with others, how you build relationships. It’s your ability to know when to say “hello,” when not to say “hello,” when to communicate, and how you communicate. We call them soft skills, but in some ways, they’re the real skills, the hard skills that you need to move forward. They’re not as quantifiable as some of the other hard skills that we’re more accustomed to.

SkillsCamp: Sometimes there’s a negative connotation associated with soft skills when seen in comparison and contrast to technical or “hard skills”.

Brian: Exactly. They really aren’t soft. It’s easy to find the hard skills, but it’s really, really difficult to find the soft skills in people. The hard skills, they get you in. You got a diploma, whatever else, it gets you into the company. The soft skills are the skills that will actually move you forward in your career. They decide how long you stay in the organization and your growth within the organization.

SkillsCamp: What do you think are some other top soft skills that are going to be essential to the workplace of tomorrow?

These may not seem important to some, but I see their value. It’s those soft skills that people gravitate to and are inspired by. They make people say, “I want to be like that person”. It’s not my accounting skills, it’s my personality, right?

SkillsCamp: Brian, that dovetails perfectly into another question: from your perspective as a senior leader in the organization, what is the impact of soft skills in an organization like this? How do they affect the bottom line?

The challenge we have in business is that most of us are focused on now. We believe that the hard skills are the ones that will get us to that ROI tomorrow. In reality, though, it’s the soft skills that will get you there. They’re hard to measure, that’s the thing. When you measure them, you have to look over a longer period of time to properly assess how effective they are.

As we look back on the last three years, our business has been performing at a whole new level recently. It has taken that whole period of time to see the results of prioritizing soft skills. 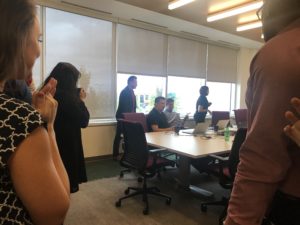 An [unplanned] birthday song to a colleague while we were there.

SkillsCamp: That’s very interesting. We imagine that everyone who works over here is a high performer. Do you think that some of your engagement initiatives and some of the cultural pieces that you’re building over here are also contributing to retention and recruitment? You mentioned the recruitment, the impact of soft skill development for recruitment, but what about retention? Keeping people happy, and preventing them from burning out?

Brian: For sure! If you have empathy, you can then create something that is a personal experience for an individual. If I’m thinking about my employees purely based on hard skills and as machines, I don’t ever get the opportunity to talk to them from a personal perspective.

Everyone has a completely different story. Different story, but the fact that I know what that story is because I am connected with that goes back to your previous question. I’m connecting, I’m relating, I’m collaborating. This goes a long way in retention and even further with attraction as well.

SkillsCamp: How are you creating these opportunities to learn about your employees?

Brian: We have a lot of socials that are bigger events, but it’s more than that. Every single person in this building has a one-on-one with Lee Vera, our General Manager. That tends to start by being about them, how they are doing, not about the business. When I get something from their interview, or when Lee Vera picks up something through her one-on-ones, we make note of it.

Every single person that you see here that we’ve hired, when I meet with them, the first thing I try to get across is my story. I tell them who I am, where I came from, how I got here. That eases people. It begins to feel like this is a different place, it’s a community, it’s a family feel.

The common denominator is demonstrating that you care and that you know what is going on in the lives of people. Some may see it as superficial conversation, just passing by and saying hello, but it’s more than that. You’re stopping by on your time and then you’re giving that person one-on-one time.

Brian: Exactly. We also have this incredible program called the Inward Heart. It’s about character development, about unpacking yourself. It’s a tremendously deep program where people go below the surface to tell you about themselves. In there, you really get to understand people, you feel like you know why someone does what they do. Then, because I know that, because I know where they’re coming from, I behave differently.

This is a program that has transformed people beyond anything I’ve ever seen, anywhere else. It really puts the lens on you. It’s not a professional development program. It’s really about, “how can I be my very best self?”.

It’s based on the premise that there are behaviours that are effective and there are behaviours that are ineffective. The most effective behaviours, which we call above-the-line behaviours, are when you are full of humility and love. This is when you are very authentic to who you are, you know your strengths, you know your weaknesses, but you’re also transforming yourself. Because you know those strengths and those weaknesses, you’re doing something about it. You’re learning, you’re moving forward, you’re progressing. You know it’s a long-term journey.

Because you know who you are, because you’re developing yourself and transforming yourself, you become very, very reliable. The things that you say you’re going to do, you do. As a result, you’re a high-achiever. That’s humility: knowing who I am, and then doing something about it. That’s really focused on self-growth.

But, you’re not complete if you’re just about humility. You’re complete when you can now bring others with you. When you bring those two together, humility and love, you really become a powerful person. Those are the above-the-line behaviours.

Below-the-line is basically the opposite. It’s where you are very controlling because you want your world in a particular way, where you can win. It’s where you’re very competitive, for the sake of competing, just for you. It’s the ego-centric, boastful person. It’s pride, and fear.

SkillsCamp: What would you say to leaders who think that it might work against their leadership, it might make them look weak by participating or being vulnerable in that way?

SkillsCamp: What do you say to people who see is that way?

I heard something a while back that’s really stuck with me. It said that everyone says, “As a leader, I’m trying to motivate people”. I don’t believe that as the leaders we motivate people. I think people are intrinsically motivated. Our job is to not demotivate people. People arrive motivated. What we say and what we do to them can chop them down. 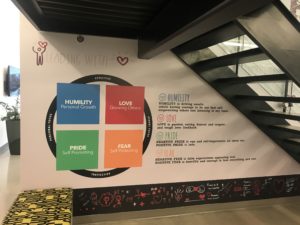 Values painted on the walls of the office.

SkillsCamp: That’s fascinating, I like that. We briefly acknowledged the education system’s role in instructing a certain rigidity and resilience into their students, which might run counter to the type of board that we’re trying to build here. What do you think educational institutions, particularly post-secondary, could do to better equip their students for the soft skills that they’ll need tomorrow, like the ones that you mentioned?

Brian: Acknowledge them, first of all.

Then, once you acknowledge them, recognize the value that they have in the overall equation. Believing that making great leaders is a one-legged stool, all about technical, functional skills is quite naïve. We are people, at the end of the day. We’re all trying to work, live together, and be productive at work. Recognizing that soft skills play as important a role as the technical skills is an important leap forward for us at the educational, institutional level.

SkillsCamp: That’s great. Brian, to switch gears here, what do you love best about your job? What gets you up out of bed every morning?

Brian: What I love best about my job is seeing people grow up. I love to see that person that I met the very first time doing the interview process a year, two years, three years, five years later. Seeing them progress to heights that they could not have imagined is what drives me, gives me energy. There’s nothing more fulfilling for me than to see that.

SkillsCamp: Incredible! On that note, Brian, what’s something special about the company that you wish more people knew about?

We do a number of different things. Like, for example, we’ve done mindfulness training. The Leading with Heart session that I talked about, we’ve had friends and family participate, because it’s more than just you at work, it’s about you at home. We’re preparing people to have a greater impact in their professional lives, in their personal lives, and in their community.

SkillsCamp: That brings us to a question, Brian, which is getting close to below-the-line territory. It’s about your legacy. What are you hoping people say about you and how they remember you once it’s time for you to move on from the company?

Brian: Yes, yes. Those are the three Cs.

SkillsCamp: By far the most succinct and profound articulation of that answer that we’ve heard today, so thank you for that. Second-last question, Brian: can you name a book that’s been a game-changer for you? 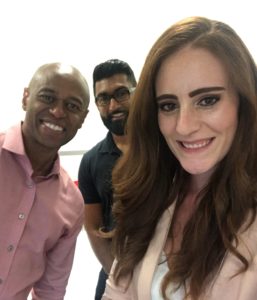 Brian: Good to Great, by Jim Collins, is one of my favourites. I’m reading a book now called The Power of Moments. It’s about finding that moment where you can make a difference. That’s one of the cool ones. Those are the two that come to mind.

SkillsCamp: Are there any role models that you’d like to shout out in this interview?

Brian: For sure! There’s Misty Reich, who was the chief people officer for all of KFC, globally. I’m forever trying to be Steve Price and Misty Reich, because they are, to me, the epitome of what a leader ought to be. They really know their stuff. They’re solid people. They’re business people before they’re HR people. I always try to be like them.

SkillsCamp: This has exceeded our wildest expectations. Thank you so much for your time and your wisdom!

SkillsCamp is a soft skills training company working with business and educational institutions. Through workshops, programs, online content, and consulting, we help your people learn skills such as communication, emotional intelligence, teamwork, and more. 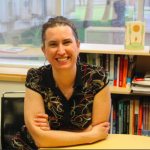 #SoftSkillsSpotlight: Natalie Allan’s Curricular Approach to Residence Life Services – You Are a Teacher, Just in a Different ClassroomSoft Skills Spotlight